Gathering of the nannies

We spent Saturday at California Adventure and downtown Disney. A bunch of us nannies met up for dinner at rainforest cafe and to watch the fireworks. Amelia had a blast! Here is our group shot. Abbie had her fingers in her ears beause she doesn't like fireworks. :-) 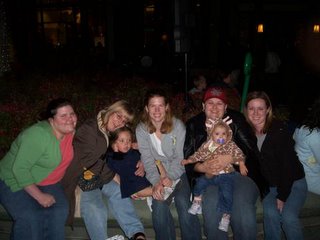 Tatiana, Mic, Abbie, Paige, Me with Amelia and Rene.
(Isn't Amelias new sweater from Gymboree cute? It has giraffe horns! :-)
Posted by Stephanie at 7:27 PM No comments:

Valentine's day was great! Jeff got me roses,(lots of them!) a card from him, and a card from Amelia. He also found these sweet little prescious moments figures, one is a mom with a toddler the other is a couple standing together holding hands. That was one of the better gifts he's given me, I'd much rather have flowers and little stuff that involved some thought, than big random things. :-)

Vacation to San Diego was great! We had a great time, our hotel turned out wonderful and Amelia did so well. She was sick part of the time, but other than that it was all well. I'll post pics later I have to get the film developed.


(Yup I'm a loser! I lost our digital camera, and have had to resort to using the old 35 mm. I'm ready to just buy a new camera. )


We stayed at the Residence Inn by Marriot. I'm always afraid when I stay somewhere I've never been, but they had good ratings from AAA. I"m really glad we stayed there. With the AAA it was still 160 a night but oh so worth it. We had a full kitchen in our suite. We also had a seperate bedroom and living room, so we didn't have to have Amelia in with us. There was a dinner provided on weeknights and breakfast every morning. I have to say I was impressed with the breakfasts, Jeff has not stopped talking about the waffles. We got to make our own waffles, and he thought it was so neato. They had tons of kid friendly foods, and the food was actually good! THe hotel also had a gym, and I worked out in it twice! yay me. :-)

We spent some of our trip in Old Town San Diego and the rest at the San Diego zoo. The zoo was great the weather while we were there was perfect. Amelia loved getting out of the stroller and running around. In Old Town we found the best Italian restaurant, I'll put a link in for their website later. The food was amazing. We spent a lot, but hey, it was my birthday dinner so I didn't mind. :-) Oh and my wonderful husband is going to get me the plates I want as a birthday present.

We both really liked San Diego, I'm trying to convince Jeff he should commute up to the OC. He's just not agreeable yet. It's also cheaper to live in than the OC.
Posted by Stephanie at 4:16 PM No comments:

For christmas Jeff got me a bunch of gift cards. One was to bed bath and beyond. I finally went to use it yesterday and found a set of plates I love. They were considerably more than my giftcard would allow, but I have a feeling Jeff is going to get them for me for my birthday. Yes I want dishes for my birthday. The ones we have now are from target and they are all chipped up. There isn't a lot of stuff we have room for more of or need, so I want dishes for my birthday! These ones are cool because they can go in the oven as well.

And here's the link, just in case anyone wants to buy them for me! ha ha ha

And here are my new glasses. They look much better in person. I love how they feel too. Yup I'm a weirdo.