A little dirt never hurt anyone...

What happens when you mix Amelia, a bucket, some water and dirt? 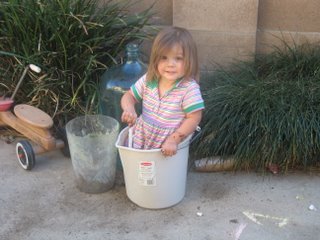 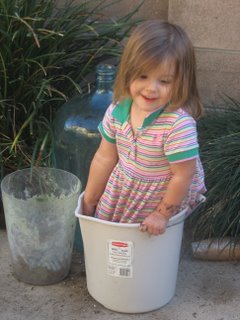 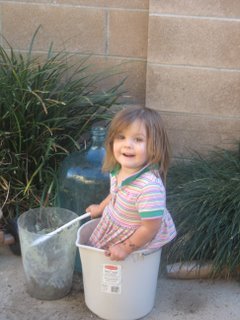 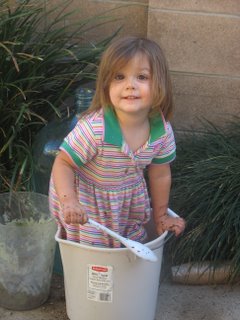 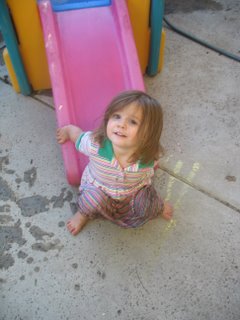 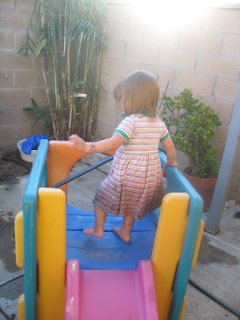 This article was in the register today. I have total respect for most law enforcement officers. But planting evidence like a loaded gun for "training purposes" is just asking for trouble. And police officers wonder why people don't trust them???

Here is the link
http://www.ocregister.com/ocregister/news/abox/article_1371805.php
and the article.

By JENNIFER MUIR
THE ORANGE COUNTY REGISTER
HUNTINGTON BEACH – A Huntington Beach police officer's exoneration for planting a loaded gun in a suspect's car has led to the revelation that police routinely plant evidence in unsuspecting civilians' vehicles for training exercises.

Chief Kenneth Small said Friday that police plant contraband – including unloaded weapons, fake drugs and drug paraphernalia – in suspects' vehicles after they're arrested as a method of training new officers in searches.

The training practice came to light Friday after a Huntington Beach man said he learned that an officer who planted a handgun in his car during a traffic stop was exonerated of wrongdoing. Thomas Cox, who was later convicted of traffic and drug violations, said he watched in horror as another officer found the gun in the trunk of his Hyundai, igniting laughter among officers.

News of the training technique sparked surprise and criticism from police officials across the county, who said planting weapons in civilian vehicles is "inappropriate" and a "bad idea."

"I've never heard of anybody doing that," said George Wright, chairman of the Criminal Justice Department at Santa Ana College. "You're using someone else's property, and that can lead to other problems. … What if someone forgets about the gun and just leaves it behind?"

Police in Las Vegas abandoned a similar training tactic for drug-sniffing police dogs last year, when a man was falsely charged with drug possession after a canine officer forgot to retrieve drugs planted in the man's car, according to published reports.

Performing the exercise in a parking lot with a police vehicle would not be as effective because the officers would be expecting to find contraband, he said. The training is usually done after suspects are arrested and the cars are being readied for impound, Small said.

But Cox said he was feet away from Officer Brian Knorr that January evening when Knorr flung the gun into the trunk.

"That's not my gun!" Cox said he shouted.

Cox had been pulled over by police after a witness said he saw Cox hit another vehicle and flee the scene.

Cox said he was never told the officers were performing a training exercise.

He filed a complaint with the police department in August against Knorr and another officer, who he said barreled questions at him and called him names like "Slick.''

Several officers testified about the incident during Cox's October trial. Knorr testified that he planted the loaded gun because he "saw an opportunity to create a realistic search of a vehicle."

He said he and another officer "had a little chuckle" that night because the gun was found by a veteran police officer instead of the intended subject of the exercise.

Cox was convicted of hit and run, driving without a license, driving under the influence, reckless driving and possession of marijuana. He awaits sentencing Dec. 15.

Last month he received a letter from the police department saying the officers in his complaint had been "exonerated" of wrongdoing.

Small said Friday that using a loaded weapon during training – as Knorr testified he had done – is against department policy, and that performing the exercise in front of Cox "could have been done in a better way."

But he said Knorr was exonerated because the policy was not widely understood.

"I didn't feel comfortable holding one officer accountable for it when others were doing it as well," Small said. "I think the department did something wrong because we didn't make sure people understood what our policy really was."

The department doesn't have a formal protocol for using the public's vehicles in training exercises, department spokesman Lt. Craig Junginger said. However, vehicle owners typically aren't told their cars are being used for training because they're not usually present when the training occurs, Small said.

The training exercises are "designed to be very controlled situations, planned … and discussed with a supervisor in advance,'' Small said.

Ed Pecinovsky, bureau chief of training for the state's commission on Peace Officer Standards and Training, said that no matter how careful officers are, using an arrestee's car in a training exercise is "asking for problems."

"This is police abuse," he said. "Huntington Beach used to be my dream home. Now, I'm moving away."
Posted by Stephanie at 7:04 PM No comments: