Today, my house is peaceful. Anthony is napping. Amelia is watching cartoons. I'm having my quiet time and playing on the puter. We're having turkey meatloaf for dinner tonight, it's in the Crockpot cooking. I love the Crockpot. Well, until I have to scrub it out,then I'm not so in love with it.

This weekend is the international street fair in Orange and I think we're actually going to go this year! I wanted to go last year but I was 7 months pregnant and it was about 105 degrees out that weekend, so Jeff was not into going. Hopefully this year will be better.

Someone sent me a link for a wine of the month club. I thought it was pretty funny since I generally consume alcohol about 3 times a year and then it's usually margaritas, not wine. Oh well.
Posted by Stephanie at 4:30 PM 3 comments: 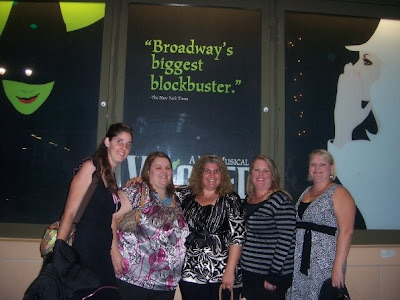 Last night we had a mom's night out and went to see Wicked at the Pantages in LA. I had such a great time.

We carpooled up to Hollywood and Highland in the minivan. We had the CarBitch (Erin's navigation system) to help the navigation, but I think that may have confused me more. Dinner was at Twist. I spent more on alcohol than I did on food (what's up with $13 drinks??) but it was worth it. We were all a little tipsy by the time we left for the theater. Due to the amount of alcohol consumed and the height of my heels, I was all for the shuttle.

The show was amazing. We had great seats. (Thanks Kathy!! :-) ) I would definitely go see it again. If you're not familiar with Wicked, it's based on a book, and it tells the other side of the story of the Wizard of Oz. So after the show, we took the shuttle back to the mall and headed home. We did learn that it takes a few mommy's to figure out how to open the doors on a minivan. I don't think they ever did figure out to work some of the seatbelts in the back of the van. LOL All in all it was a great night, and there was some talk of a weekend in Vegas. Now that would be fun!!
Posted by Stephanie at 9:25 AM 2 comments: 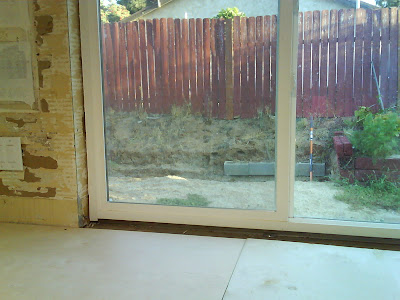 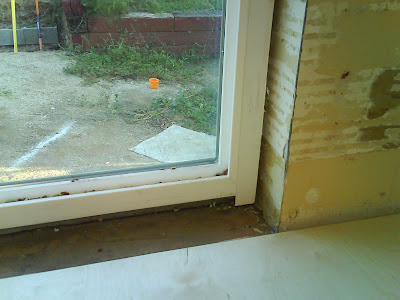 Posted by Stephanie at 6:52 PM No comments:

Monday Slow Cooker MeatLoaf (although I use turkey not ground beef.) Along with baked potatoes and veggies

Tuesday will be something easy like pizza for Jeff and the kids, I'm leaving early to go to LA with my friends to have dinner and see Wicked. I'm soooooo excited!!!!!

Go visit OrgJunkie to find more recipes and menu plans.
Posted by Stephanie at 8:00 AM 1 comment:

It's Thursday today. Both of my kids are napping. This so never happens. It's weird! Oh krap Anthony must have heard me sit down, cause he just started crying. How do the kids know the second you decide to rest? Oh well maybe when they are older, ya know sometime after they get over acne life will calm down a bit and I can have some free time. :-)
Posted by Stephanie at 4:23 PM No comments:

So those spammers are getting better. I just opened an email that was spam! Most of the time that stuff doesn't even make it to my inbox, (thank you google!!) but this not only made it there, I thought it was from someone I knew and opened it. Too bad I don't need a truck accident lawyer. If I ever get into an accident with a semi, I guess I would know who to call!
Posted by Stephanie at 4:27 PM No comments:

I have 8 blogs to write. That's a lot. This particular one is about diet pills. Not sure what to say about hose other than I don't think they are a good thing.

Jeff is trying to put Anthony to bed again. Poor baby woke up (it's almost 10 pm), pooped, then he was mad that he was awake and poopy. It sounds like he is quieting down now though.
Posted by Stephanie at 9:40 PM No comments:

I have all these things I would like to blog about, but so many people read my blog now that I feel weird talking about a lot of that stuff. By the way I mean people I know, people in my family and such. Isn't it funny that I'm cool sharing my drama with friends and people I don't know, but get a little creeped out at the thought of other people lurking here and reading?

Maybe I need one blog for pictures of the grandkids, and another for me to bitch about whatever I feel like bitching about on that particular day? LOL

We're supposed to go my friend Tiffeny's house to swim today but her kids are sick. Amelia is not happy with me.

Two weekends in a row I got to go out kid free. I even had my first ever whole night with no children!! It was only the second time I've been away from Amelia all night ( the first time was the two nights in the hospital when I had Anthony.)

A few weekends ago we had a sleepover for one of my groups. All of us girls spent the night at one girl's apartment in LA. The evening involved a lot of mimosas and margaritas, as well as drunken karaoke, leftovers from some bigwig party in Brentwood and a really drunken game of taboo. I'm not sure it qualified as an actual game though since there weren't many rules followed and we kept forgetting to watch the timer. It was fun though. When I finally awoke the next morning and drug my sorry ass off of Beth's couch, my eyelids felt like they were glued shut and full of sand, and my head was trying very hard to explode. The best part was when I checked my phone a mere 5 minutes after stumbling back from the bathroom, and found 7 missed calls from my husband. Was anyone bleeding? Nope. Was anyone sick? Nope. Had our house burned down? Wrong again. Jeff was tired. And he wanted to know when I was coming home so he could nap. LMAO I love my husband.

Friday night I got to go out again without the kids. I went to LA for a jewelry party. The jewelry was really nice and it was great to visit with a few friends I hadn't seen in a long time. The funny part though was pretty much everyone at the party except for me and another lady were fluent in Spanish. And a couple of he older ladies don't speak much English. So the woman who was showing us the jewelry kept going back to Spanish and then she would come talk to me and Yvonne and we'd just look at her. I get about every 3rd word, ( hey it was good practice right? I should go visit them more often!!) but it was still pretty funny. I think we had the poor lady a little frazzled. LMAO But hey I got new jewelry, had some great drinks and delicious tiramisu. All in all it was a good night.


OKay I had more stuff I was going to ramble on about, but the natives are getting restless. Maybe I'll be back later.
Posted by Stephanie at 7:47 AM 1 comment:

So today is one of those days where I have to write 37 (or 9 really) posts because I haven't been keeping up with them like I should be. But thats okay because I'm in the mood to write today. Anthony is asleep and Amelia is curled up with me watching Finding Nemo. My house is a mess but we have clean laundry to put away and a fridge full of groceries, and both kids are in clean clothes and have been bathed in the last 12 hours. I guess I'm not such a bad Mommy today. :-) Amelia just told me we need to buy 3 swing sets. Silly girl. First we need a yard big enough for a swing set!
Posted by Stephanie at 1:52 PM No comments: