Amelia and the binkies... 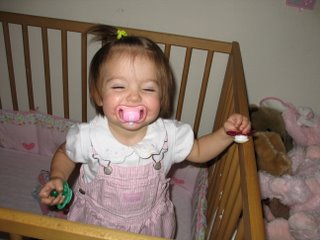 I am finally back on track and losing again. Well I'm not sure if I was ever off track, I just didn't lose much for a month or so. I have been consistently working out though and I am definitely feeling better. I have more energy when I eat right. I just have to remember that!

The loss this week put me down another pound, and I finally hit 60 pounds gone, not bad since I was traveling all weekend.
Posted by Stephanie at 9:20 AM 5 comments:

**This post may be most appreciated by moms, nannies, and other child care providers. It's a bit yucky.**

What is the fascination that small children have with their own poo really about? We have been working on potty training M, the 2.5 year old boy I nanny for. He does great peeing but will not poo in the potty. He will hold it until he gets off the potty then go in his pullup. He then gets angry when I try and change him. Well I think today we got over that hurdle.

He decided he wanted to be changed. The problem is, he decided he should start the changing by ripping off his pull up. Did I mention his poo has been bright green today? Did I mention the pull up was full of the bright green poo? Of course he managed to smear it all up and down his legs. So the next thing I know he is running around the house naked, with poo smeared from his bottom to his feet.

This is when I start freaking out. Poo freaks me out. Funny that I"m a nanny and change diapers all day. That is a controlled environment. Put baby on the changing table, change diaper, use lots of wipes, and all the poo and wipes go right into the diaper genie. I don't have to get gunky. However this was much less controlled.

M thought it was hilarious that there was poo all over. In fact, he decided to stick his fingers in it and smear it around some more. Oh my. So now I'm freaking out, trying to not vomit and also trying to keep him from spreading poo around the house. Did I mention he thought running around covered in poo would be fun?

I did manage to get him to hold still ( well still for a 2 year old, only mild wiggling and giggling) long enough to get in cleaned up. Then I vomited. I have decided we should wait until college to continue potty training.
Posted by Stephanie at 11:05 AM 2 comments:

Email ThisBlogThis!Share to TwitterShare to FacebookShare to Pinterest
We didn't make it to San Jose, I got sick. But Amelia and I are going up in two weeks. And it will be even better because I can drive up during the day Friday, instead in the middle of the night.
Posted by Stephanie at 11:03 AM No comments:

Amelia and I are going up to San Jose this weekend for Haley's birthday. Oh my goodness can she really be turning 7? I remember when I first met her, with her first nanny. I think she was only 2 then. I can't believe how quickly they all grow up.

There is always so much baby stuff to take everywhere! Thank goodness their house is pretty kid friendly, I won't have to drag as much krap with me.
Posted by Stephanie at 2:50 PM No comments:

I got a new phone.

It's a motorola Razr. Jeff is way more excited than I am, I am just happy to have a working phone again!