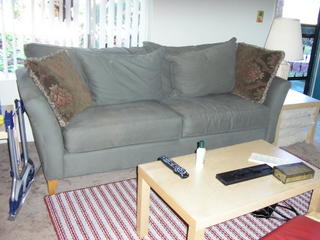 This is a picture I took when we got the couch 6 months ago from a friend. My camera was not working last night so couldn't get a new picture.
Posted by Stephanie at 5:57 AM 1 comment:

The trip up to Oregon went pretty well. Amelia and I flew out a 8 Thursday morning and returned at 11 pm Sunday night. She had a great time with her cousins, I can't believe how big all three girls have gotten! I'll post some pictures from the weekend later, I forgot my digital camera, so had to use regular film. I forgot what a pain it is to wait for film to be developed, dang I'm spoiled now. ha ha. Anyway it was a good trip.

The crazy part though was there was a thunder storm going on in SoCal Sunday evening. So we had to land in the middle of it. I actually was seeing lightning out the window of the plane! It was also really turbulent. Amelia did pretty well, didn't sleep at all. She got grouchy at the end of the flight, and the flight attendant gave her a cookie. I think he just wanted her to be quiet. :-) So my 9 month old ate a chocolate chip cookie. Oh well, just once won't kill her I guess. She sure liked it! We were both very chocolately by the time we landed. It was a really hard landing, I'm sure the runway was slippery from the storm which didn't help make it any smoother. On the way home from the airport Amelia finally crashed in the car. We watched the lightning across the sky all the way home. I was afraid to carry Amelia in from the car when we got home, the thunder and lightning were happening almost simultaneously. We finally just made a run for it. I think the next time I fly, I'm going to get Amelia a seat. She is too wiggley for my lap!!
Posted by Stephanie at 1:10 PM No comments:

So now that I FINALLY got Amelias room all done how I like it, we're moving. I like the blue in her room now, but of course I want to do something different in the new room. THe bedrooms have big vaulted ceilings so I can't paint all the way up, and whatever I paint I'm responsible for getting back to white when I move out. So I'm thinking about doing a border at chair rail height, and just painting below it. I'll leave the top half white, then paint the bottom a light green. It will look sort of like grass, this is the border I like, then the green paint color.

We're moving... in two weeks! I don't know how much I'll be updating in the next few weeks, I have so much to do, and I'm going to Oregon on my days off next week, my nieces are having their birthday party, so Amelia and I are flying up for the party. :-)

We found a new apartment, it's a bit more than what we are paying now, but it's soooo much closer to my work, and Jeff's commute won't be too bad. It also has a garage, washer dryer hookup and 2.5 bathrooms. Wahoo!! :-) Much better than the 900 square feet we have now...

Posted by Stephanie at 10:28 AM No comments: