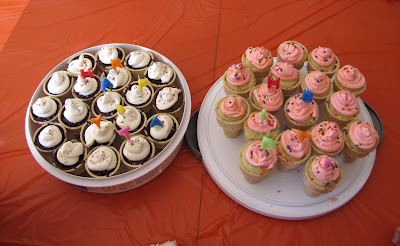 Amelia wanted ice cream one cupcakes for her birthday. I remember having them one year when I was a kid, so I went on a mission to find a recipe. Here's what I ended up with. 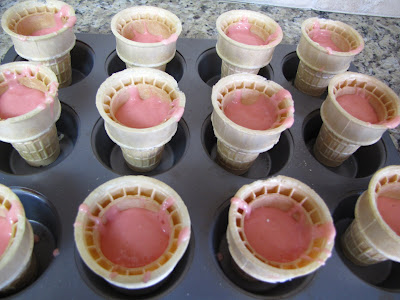 I made two batches way ahead of time because I wanted to make sure it was going to work how I wanted it to. Make up a batch of cake batter, just like you would for cupcakes. I used boxed cake mixes. I tend to splurge on the icing, not the cake for my kid's parties. For the party I made two dozen chocolate and two dozen white with sprinkles.

Use a cupcake pan and put the ice cream cones in the pan. Fill 2/3 or so full with batter. It's okay if you have batter left over, you don't want to fill them too full. if they get overfilled, the cupcake will cook over the top and make the cone all icky. 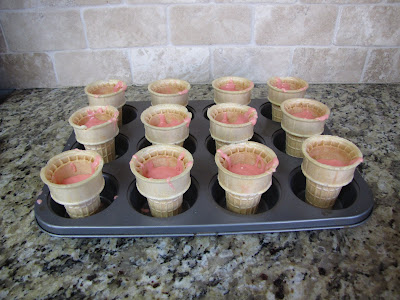 Bake them according to your cake recipe directions for cupcakes. I cooked 24 at a time, with the cones in two pans on one rack in the oven. Because they're taller than cupcakes, that seemed to be the best way. 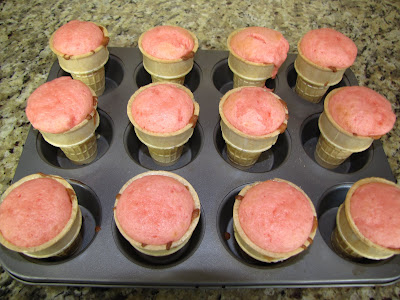 After they cool they just need to be frosted and decorated. I used the same buttercream recipe I always use for my kids cake. Half got dyed pink and half I left white. I had a hard time storing the finished ice cream cone cupcakes. My cupcake holders weren't tall enough. So I had 2 dozen in a cupcake holder with foil over the top, and toothpicks holding the foil off the icing. The other batch ended up in a big cake holder, and they kept falling over. I'll have to figure out a better way to store them next time. 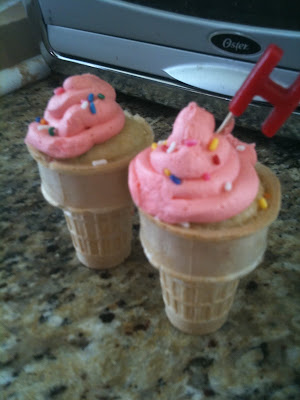 Posted by Stephanie at 1:53 PM