It's Tuesday! Time to tackle something right? It's been a while since I've participated, but this week, I've actually got something done. My tackle for the week is hanging pictures. We've lived here since the beginning of May, and as of last week, there was nothing on the walls. So today, I'm hanging stuff up. So far, the tea cup shelf is up in the office. There are things on the walls in both kids rooms, and I've hung pictures in my room and bathroom. I'm not putting anything up in the kitchen or dining room because it will just have to come down anyway. ( Have I mentioned that we're not redoing our counters now? Instead we're getting a new kitchen??) I'll post more about that later. Let's just say I'm going to be using lots of wrinkle creams and dying my gray hair by the time this is over. LOL

So, did ya play? Go visit 5minutesformom.com to see other Tackles. :-) 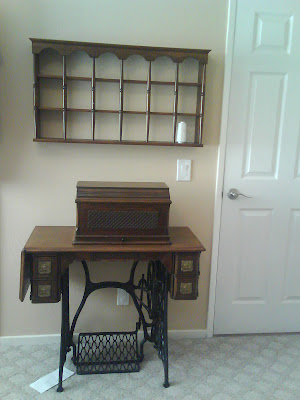 What a beautiful shelf.

Don't feel bad..we have been in our new home for 5 yrs and some walls are still left undecorated.

Nice job! I should change stuff around on my walls, you get sick of looking at the same stuff over time. LOL

Thanks for reminding me..lol..now I need to get my ass in gear and put a few things up on my walls.

Good job! I've been 'tackling' lots of projects around teh house lately but keep forgetting to post about it.

Steph! Is that a treadle sewing machine?! How cool! Haha, we have been in our house since April 4 and still not much on the walls. I don't think I ever got around to it in our last house and we were there for 18 months, the longest we've been in any house!