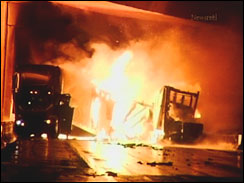 (AP) A crash in a Southern California freeway tunnel quickly turned into a fiery, chain-reaction pileup that mangled several trucks, killed at least two people and shut down the key north-south route as the wreckage burned for hours.

Firefighters began hauling the mangled, blackened debris of more than a dozen big-rig trucks out of the tunnel Saturday afternoon. The crash late Friday involved at least 15 trucks and possibly one or more passenger cars, and sent people fleeing for their lives. At least 10 people were injured.

"It looked like a bomb went off," said Los Angeles County firefighter Scott Clark, one of about 300 firefighters who battled the blaze throughout the night.

California Highway Patrol Officer David Porter confirmed Saturday that the bodies of two crash victims had been found in the tunnel. He couldn't immediately say whether one was a trucker who had been listed as unaccounted for.

The pileup in the southbound truck tunnel of Interstate 5 began about 11 p.m. Friday when two big rigs collided. As crashes continued throughout the tunnel, about an eighth of a mile long, five big rigs burst into flames and the fire quickly spread to others.

Firefighters estimated that at least 15 trucks were involved. The cause of the initial crash was being investigated, but authorities said it was raining at the time.

The charred skeletons of at least a half-dozen big rigs could been seen peeking out of the tunnel's south end Saturday. At least one was carrying produce, and a smoldering load of cabbages lay scattered across the pavement. A pile of charred truck debris protruded from a tunnel wall.

As the fire spread Friday night, flames shot out of both ends of the tunnel, rising as high as 100 feet into the air, firefighters at the scene said.

The intense heat caused concrete to crack and melt, sending chucks falling onto a road below throughout the night. Firefighters worried that the damage could cause parts of the tunnel to collapse, particularly if they were to allow many cars back onto a road that runs above it.

Interstate 5 is a key route connecting Los Angeles to San Francisco, as well as a major commuter link between Los Angeles and its northern suburbs. There are likely to be huge traffic jams in the area if it is still closed when people return to work Monday.

By Saturday afternoon, all of the flames appeared to have been extinguished, and firefighters went inside.

The canyon surrounding the tunnel remained filled with thick, acrid smoke, however, and until they examined the wreckage, firefighters said, they wouldn't be able to tell whether any trucks had been hauling toxic chemicals.

Shortly after the crash 20 people managed to run out of the fiery tunnel, including the 10 injured. Eight were reported to have minor injuries and two had moderate injuries. All were treated at hospitals, mainly for burns and neck and back injuries.

Although the tunnel is designed to carry truck traffic through a mountain pass area, Fire Inspector Jason Hurd said passenger cars may also use it, raising concerns that some might have been trapped inside.

"We're going to have to do a very methodical search," Tripp said. "There could be, unfortunately, more people that were not able to escape."

Hurd couldn't say when authorities might be able to reopen the section of freeway about 30 miles north of downtown Los Angeles.

The section of freeway was shut down twice before, by earthquakes in 1971 and 1994, when large overpasses over canyons collapsed. The worst of the quakes, the Northridge quake of 1994, also damaged another nearby highway, snarling traffic throughout the area.


I got this from CBS News. Did I mention that I usually go that way, through the truck lanes? eep. They said on the news tonight that it will be Tuesday at least before the rest of the freeway is open. Should be fun for commuters come Monday...
Posted by Stephanie at 9:51 PM